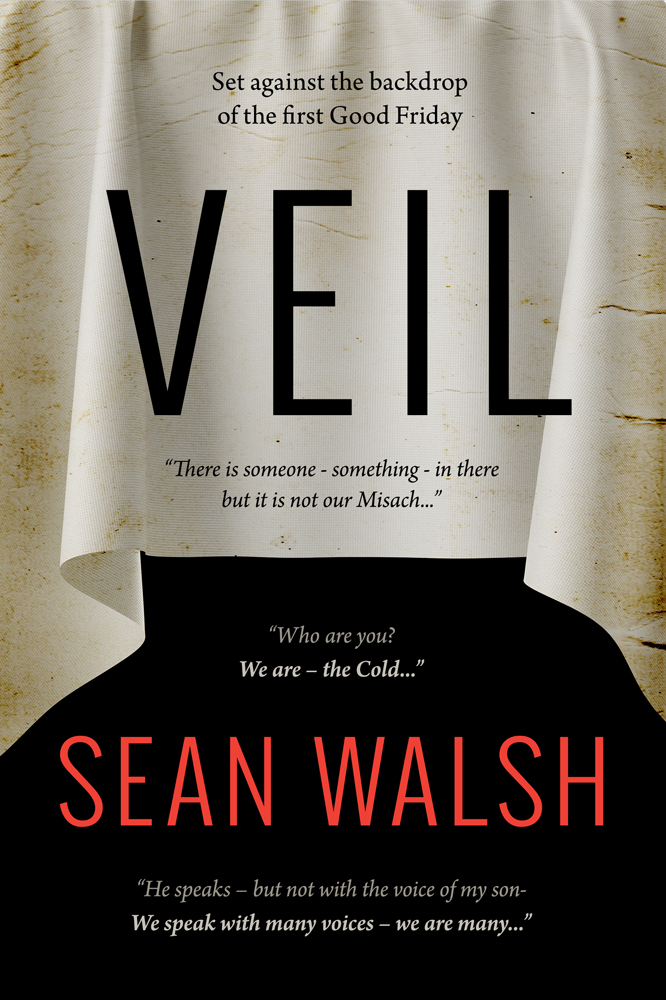 A Drama in two acts set against the backdrop of the first Good Friday. Herewith a sample scene. Taste, savour…

AZARIAS: He is not innocent.
VERONICA: Then what is he guilty of? Doing good? Teaching love, justice, truth? Speaking words that never before came from the lips of man? Is he guilty of some transgression because he gave her dead son back to a widow woman, because he gave sight to a blind man, gave speech and hearing to a deaf and dumb mute? Is he to be crucified because he relieved a lunatic boy of the devil?!
AZARIAS: That will be enough Veronica!
VERONICA: No, it will not be enough, my father, not by a thousand words! An hour from now Sadoc, that two-faced faker, will call and bring you to the Sanhedrin – because he needs your vote, he and the others, who are in on the plot. Don’t you see? They are only using you. He doesn’t give a fig for you! Why, they all ignored you until now because your son’s condition was a slur on their good name. Pharisees – they are parasites!
AZARIAS: Hold your tongue, Veronica. I command you!

VERONICA: Command me?! By what authority can you command me to keep silent, watch an innocent man being done to death by men who are jealous of his way with the people?

Oh, I honoured you, how I honoured you! I was so proud of Azarias the Pharisee, my father. Because he was an upright man, a scribe among scribes, who walked tall among his people. I was proud of you in those days. Now – now I am ashamed of you…

AZARIAS: My household, what comes over my household? My
son is given to lunacy and my daughter becomes a vixen overnight. Is there a curse on this home?

RUTH: Will there be a blessing on it this night?
AZARIAS: You too? No, surely not, my own wife! Surely I
can count on your loyalty?
RUTH:  Is it true what she says?
AZARIAS: True? The romantic ramblings of a teenage girl!
She has the mental maturity of a school child…

RUTH: But you have been asked to attend the Sanhedrin?

AZARIAS: Yes. An emergency meeting has been called by
the High Priest.
RUTH: Oh? All very sudden and unexpected.
AZARIAS: Sudden, yes. But not unexpected. This Jesus is a very wily fox: it will take the best brains among us to snare him in his speech. My colleagues need me: I will not disappoint them…

RUTH: Veronica is much put out about the Nazarene.
AZARIAS: Three days from now she will have forgotten the
entire business. ‘Tis her age, that’s all. She is a dreamer of dreams.
RUTH: I will go and comfort her.
AZARIAS: Leave her be, leave her be. She will come to
herself by and by….

It will be dark soon: we will gather to celebrate the Pasch. Here, here in this room, as we have done so, faithfully, year by year…  The Most High will send us a deliverer, as he has promised; and when he comes among us, we will know him.

And by and by I will go with Sadoc to the house of the High Priest, take my rightful place among my colleagues. We will sit in judgement on this imposter, trip him up, expose him for what he really is. And afterwards… But what happens afterwards will be no concern of mine: it will be for Rome to pass sentence.

Oh, woman, you don’t know, you can’t possibly know, what this means to me – recognition, renewal, reinstatement. Already I
feel ten years younger!
RUTH: But what if it be true?
AZARIAS: What if what be true?

RUTH: What Veronica says, what is on the lips of the common people. What if it be true that the Nazarene is, in fact, a good man?
AZARIAS: You speak treachery!
RUTH: I am your wife, Azarias, to you I have sworn life-long loyalty. Always, over the years, I have been faithful to you. And I will stand by you now, come what may.

But as sure as I am wife, I am mother also. And my son, my son lies without – ill, bleeding, possessed. Aye, possessed: I will not deny it longer. He is the devil’s.

And which of your colleagues of the Sanhedrin – good and honourable men that they may be – which of them cares a whit for our plight?

And even if they cared, what could they do? Will Sadoc exorcise
our son? Can Caiphas cure our child?..