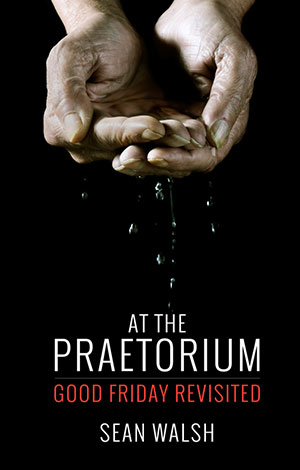 A play in one act by Sean Walsh

The Praetorium?.. The Roman fortress in Jerusalem 2000 years ago. Centre and symbol of Roman colonisation. As such, hated and despised by the local inhabitants.

In the dungeons beneath three prisoners lie in chains, awaiting execution – among them, Barabbas… while above, in morning sunlight, at the Seat of Judgement, the Governor of Judaea, Pontius Pilate, is baffled at the reticence of the Galilean:

“I am astounded at this Jesus. He speaks not a word in his own defence. Why, he will not even look at me. Stands there, centre circle, downcast…”

Sean Walsh’s play, set against the backdrop of the first Good Friday, is not a Passion play in the traditional mould. Far from it! No holy Marys or weeping women or angelic shepherds… Rather, human beings overtaken by events, on the horns of a dilemma.

Preview of “At the Praetorium” an Easter Play written by Sean Walsh from ClontarfTV on Vimeo.