Notes on the Past Imperfect/How it came to pass… 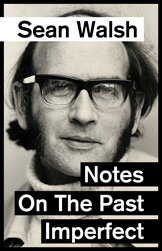 I worked in RTE’s Drama Department for some 16 years in the ’70’s,’80’s – directing, producing, scripting, editing. During that period I wrote and produced some of my own plays – well received and reviewed for the most part, they were subsequently broadcast by the BBC and, in translation, on European networks.

Later… some years into my (early) retirement… it began to occur to me: six of my scripts were inter-related, in the same mould/vein, out of the same stable, so to speak… The same voice, voices… similar, complementary story-lines… So, Sean, re-work them as chapters/sections/ in print format and hey, you have yourself a book!

If my work shows a heavy influence dating back to that time, well, I make no apology for that.

Moves forward and backwards – sometimes sideways! Disjointed narrative – rather than neatly strung together…

At times I knew where I was going – or so I thought. At other times I was drawing a chain out of muddy water – a link at a time.

Kept putting it aside, it kept re-surfacing, demanding an audience, readership.

This to give you an idea of what I’m at, where I’m coming from…

If your need is to be spoon-fed, if you have little desire to be challenged, mentally stimulated, if you wish to be left untouched in your comfort zone, if you have no stomach for the fray… then NOTES ON THE PAST IMPERFECT is not the book for you!