My trilogy of plays set against the backdrop of the first Good Friday. Now on Amazon.com Amazon.co.uk et al. 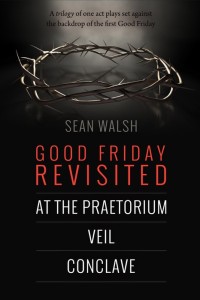 Only came to me gradually… The three plays, each set against the backdrop of the first Good Friday, as an entity, a paperback trilogy… Quite an undertaking. I worked at it right the way through Autumn, ’14 into Winter, ’15… finally published on Amazon, Spring, ’15.

No sooner had I launched the idea on Amazon than it netted a first, 5 star, review:

“These three plays are each strong enough to stand on their own, as, indeed, they have already been published separately. They each gain in strength and significance by being placed alongside each other in this trilogy. The author has given us three wonderful avenues into the tumultuous and epoch shaking events of what has come to be called ‘Good Friday’.

Several very distinct and divergent settings interact across the three plays: the official residence of the Roman governor, Pilate, in Jerusalem; the prison cell in which were held three prisoners, two of whom were destined to be crucified with Jesus and the third, Barabbas, unexpectedly released; the room where the Sanhedrin, the Jewish ruling body, met in conclave to plot the demise of a troublesome prophet; and the home of Veronica, the woman who, according to a tradition that emerged after the New Testament was written, wiped the face of Jesus as he carried his cross to Golgotha.

Pilate, his wife, the Roman centurion, the three prisoners, Joseph of Arimathea, Veronica, her parents, her possessed brother, a male religious elite, and several more characters – a fascinating kaleidoscope of human nature inhabits these plays.

The most significant person, of course, in all three plays is Jesus but he never appears as a character in any of the three plays. Yet, his presence at this culminating moment of his whole ministry has a profound impact on every character of the trilogy and drives the dramatic action across all three plays. These three plays draw the reader or viewer into the mystery of Good Friday in a highly original way. It is indeed a revisiting of this dark yet strangely glorious day.”